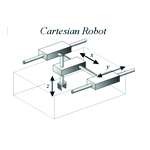 While this list is not all-inclusive, it shows applications in both the micron and submicron world. A parallel drive system can work in almost any industry.

See below for some of the issues that others have encountered when building a parallel drive system and how the Linear Shaft Motor is advantageous when building your system.

The major issue with all parallel drive systems (e.g., gantries) is orthogonal alignment (the ability to keep the parallel axis square). In mechanical driven systems (screw driven, rack and pinion, belt, and chain drive, to name a few) the main issue that arises is binding of the system due to misalignment or stacked up tolerances of the mechanical system. In direct drive systems there is an added issue of sine error that is introduced due to installation errors and variances in the linear motors themselves.

To overcome these issues, the common practice is to drive and control each side of the parallel system and electronically sync them. First, the cost of such a system is higher since it requires twice the electronics (drivers and feedback, etc.) when compared to a single-axis system. This type of tracking control system can also add synchronization and tracking errors, which adversely affects the performance of the system.

Linear Shaft Motors are highly responsive motors, and connecting them into a parallel system is easy. 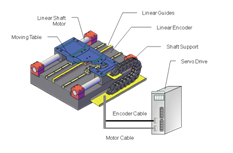 As with all parallel drive systems, the Linear Shaft Motors must be physically coupled with a mechanism that, when applied, allows the axis to realize only one degree of freedom of movement. Since the dynamic motion generated by two identical Linear Shaft Motors is the same when they are given the same control signal, the asynchronous motion of the above-described parallel system is inevitable. This, in effect, makes it possible to operate the system with a single encoder and single servo driver.

The Linear Shaft Motor is a non-contact system; when installed properly, it is impossible for it to introduce any mechanical binding into the system, due to the air gap.

One advantage of the Linear Shaft Motor over other non-contact linear motors is that the design of the Linear Shaft Motor – with the magnet in the center – makes the air gap non-critical. The coil completely surrounds the magnet, so force is the net effect of the magnetic field. This does away with any force variations that would have been caused by air gap differences, such as alignment or machining differences, allowing alignment and installation of the motor to be very simple.

What is Sine Error?

Sine error is the force differences that are produced due to misalignment of a motor's coils or magnetic tracks.

In linear motors, current is applied to the coil to form an electromagnet. The coil then synchronizes itself to the magnet field generated by the permanent magnets in the magnet track. Force is generated due to the relative strength of these magnetic fields and the angle of their intentional misalignment.

Sine error can be calculated by the following formula:

Most linear motors are designed with a north-to-north magnetic pitch in the range of 25 to 60mm long under the guise of trying to reduce IR losses and the electrical time constant. So, for example, a misalignment of just 1mm in a linear motor with a 30mm N-N pitch will cause a loss of about 21 percent of its power.

It is possible to connect any number of Linear Shaft Motors, thus allowing their forces to be added together. Regardless of the number of parallel axes, you will only ever need one driver, one controller and one encoder. 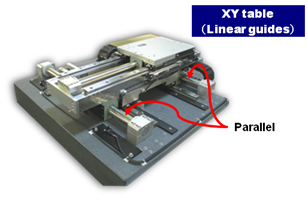 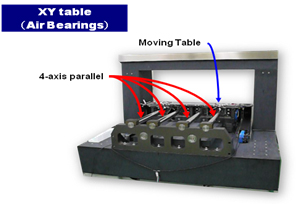 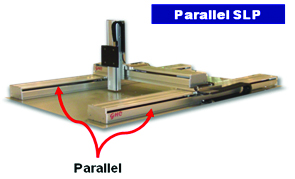 The forcers and shafts in a parallel drive system must be physically coupled with a mechanism that, when applied, allows the moving axis to realize one-degree-of-freedom movement.

3. Deviation in mounting the motors

To minimize loss of thrust due to sine error, it is recommended that the mounting position difference between the Linear Shaft Motors [Δx= Δx1- Δx2] be less than the values shown on the table below.