There are three main direct drive linear motion systems on the market today. These three motor types have distinct advantages and disadvantages and, based on the application, one motor will be better suited than either of the other motors. This white paper will present the basic mechanism of operation of these three linear motors along with the advantages and disadvantages of each. The three linear motors that will be presented are Iron-Core, U-Channel, and tubular linear motors. Each motor has a different form factor, achievable force density, and efficiency that sets them apart from the others. Understanding the differences between these motor types will give the designer the ability to choose the motor that best fits the application, instead of choosing the most familiar motor by default.

As the name suggests, iron core motors have iron in the motor. This motor is probably the best-known linear motor and has been around for a long time. The basic structure of the motor is similar to an unrolled rotary motor with discrete stator and magnetic poles. As the old saying goes, a picture is worth a thousand words, so a schematic representation of an iron core motor is shown below. As seen in the figure, the motor has a set of electromagnetic coils that are wrapped around an iron core. The end effect of this is to increase the amount of magnetic field generated by the coils, as the iron will contribute to the generated field through realigning of microscopic magnetic domains in the iron so they are in line with the magnetic field from the coils. Since magnetic fields are vector quantities, direction and intensity are additive and result in a substantial increase in the field strength seen by the track magnets. This is the major advantage of the iron core motor in that for a given input of current, there is a significant amount of force that can be generated due to this behavior. 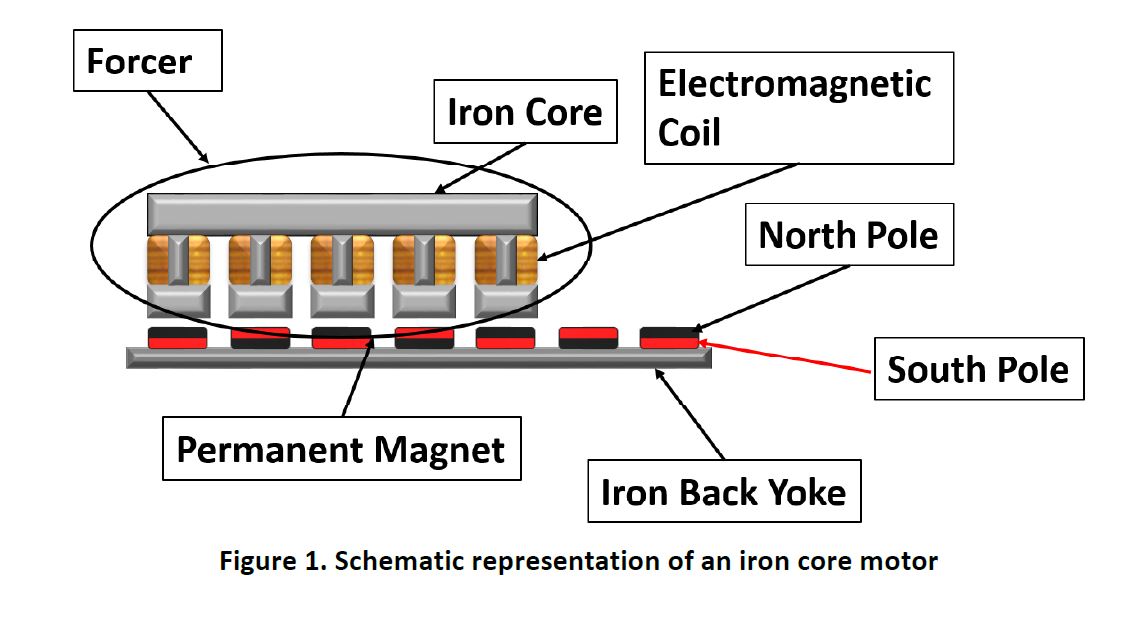 The iron core motor does have some disadvantages or, at the very least, behaviors that need to be taken into consideration when designing a system that uses this motor type.

While there are several items that need to be taken into account by the designer of a linear motion system during the design process, the large force generation of the motor for its size can and does outweigh the other factors, making it the motor of choice.

U-Channel motors were designed to have a direct drive linear motor without some of the behaviors of the iron core type motors. One of the main features of this motor is the absence of iron from the critical locations in the motor. This eliminates cogging and the non-linear relationship between the force and current due to magnetic saturation. In order to increase the amount of force generated by the motor, an additional set of permanent magnets has been added to the motor in a double-sided configuration. Additionally, the forcer is made with the electromagnetic coils that are epoxy-mounted to the non-ferrous forcer plate, typically made from aluminum. A schematic of a U-channel motor is shown below in Figure 2, where the double-sided configuration can be identified.

As with the iron core motor, the U-channel has advantages and disadvantages that the designer will need to consider when selecting a motor. This motor type typically has a rectangular structure and can be mounted in either a vertical or horizontal orientation, depending on the space constraints. The motor can have a low flat profile to fit in limited-height spaces. The other advantage of the U-channel motor type is the absence of cogging. As with all things, there are a few disadvantages that are present in the U-channel motor.

The advantages and disadvantages of the U-channel motor make its selection specific to a set of conditions; when one is selected for these conditions, it will do well. Would the other motors work with these conditions? Maybe, but not as well, and other design sacrifices may need to be made.

Tubular linear motors are a departure from the design approach of the previous two motor designs. Instead of having the electromagnetic coils interacting with the permanent magnets by riding over flat magnets, the tubular linear motor has the coils surrounding disk-shaped magnets. The orientation of the magnetic poles of this magnet shape creates a magnetic flux 90° relative to the coils. In order to understand the construction and orientation of the important operational parts of the motor, a schematic representation of a tubular motor is presented in Figure 3. 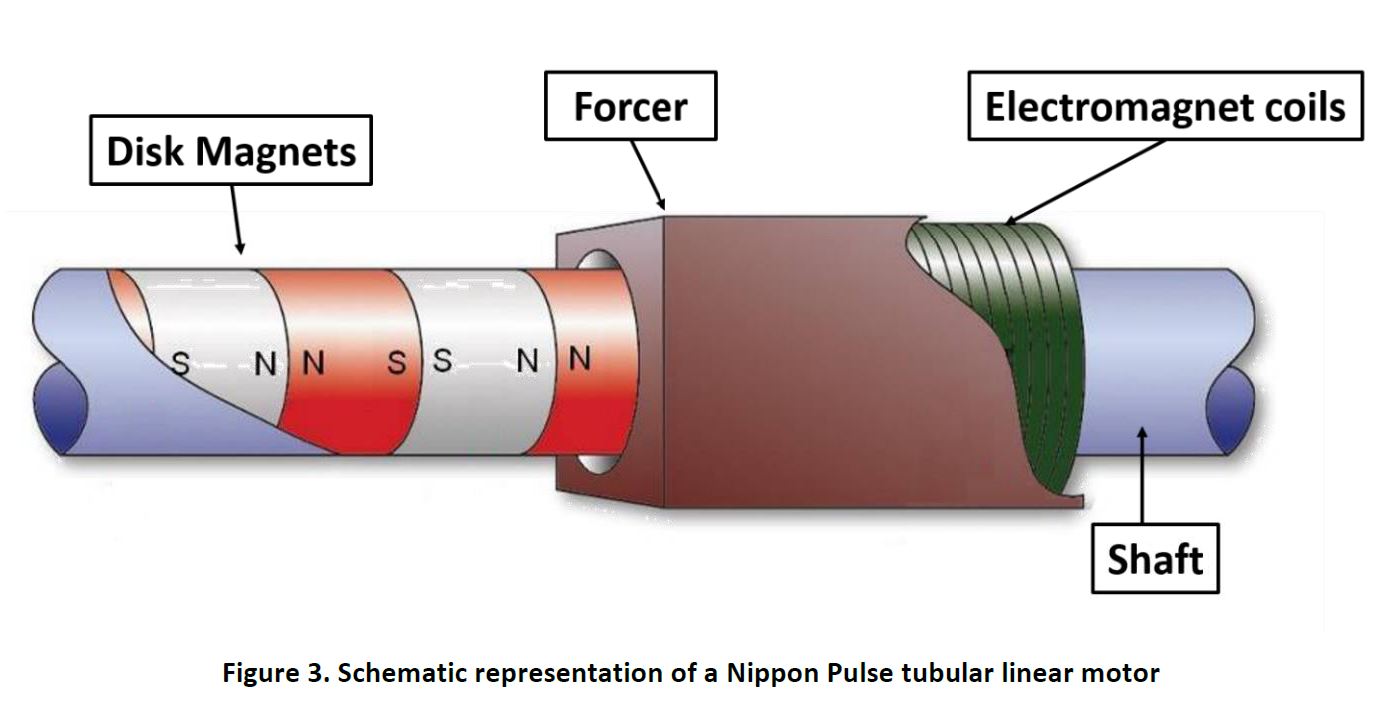 As can be seen in the figure, the tubular linear motor coils completely surround the magnets and thus will utilize all of the magnetic flux of the permanent magnets. The forcer is constructed so that the current that is injected is adjusted across the three phases so that the magnetic field distribution is distributed within the forcer, so as to line up with the poles on the shaft. The magnetic field distribution can be infinitely varied within the forcer, and provides exceptional positioning control. The utilization of the all of the magnetic flux improves force generation efficiency while keeping the costs low in comparison to the other two linear motor designs. Tubular linear motors are not capable of generating the forces of the iron core motor, but they also don’t have to contend with the other attendant problems of that motor design. There is no cogging, non-useful forces, non-linear force-to-current relationships, or eddy current generation due to the design of the motor. A comparison of the tubular linear motor design and iron core motors is listed in the table below.

Compared to an Iron Core Motor

While the forcer completely surrounds the magnets in the shaft, the movement of the forcer over the shaft and a non-critical air gap, in the case of Nippon Pulse’s Linear Shaft Motor, provides more efficient cooling than the U-channel motor type. The tubular linear motor forcer also benefits from a greater stiffness than the U-channel motor, due to the strong direction of the coil cylindrical geometry in the direction of force generation. A comparison exists in the table below.

Compared to a U-Channel Motor

Understanding the differences between linear motors is necessary to get the best performance out of a system and to achieve the machine objectives. Each motor type has its place where it performs better than the other motors. Iron core motors are great mass movers due to the forces they generate, but they’re not good at smooth and precise motion due to cogging. U-channel motors provide smooth motion at lower force ranges but have difficulty with dissipation of heat when used hard. Tubular linear motors overcome a lot of the disadvantages of the two other motor types, but aren’t as well known. Many view the tubular linear motor as a replacement for pneumatic cylinders, but they can be so much more than just that. Nippon Pulse Linear Shaft Motors have been used in high force applications and high resolution-high accuracy applications. The ability of this motor technology to be so versatile is a good motivation to explore and understand this newer motor technology for your next application.